by Jason A. Donenfeld (Jason@zx2c4.com)
with some changes by Markus Pawlata (markus@derdritte.net) and other collaborators. 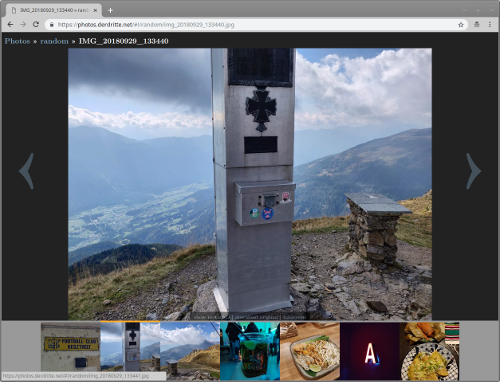 subPhotoFloat is an open source web photo gallery aimed at sleekness and speed. It keeps with a minimalist philosophy, preferring to work over directory structures rather than bloated photo database management software (there are good options available for that, if you want it). Everything it generates is static, which means it's extremely fast.

subPhotoFloat consists of two main segments – a Python script and a JavaScript application.

The Python script scans a directory tree of images, whereby each directory constitutes an album. It then populates a second folder, known as the cache folder with statically generated JSON files and thumbnails. The scanner extracts metadata from EXIF tags in JPEG photos. subPhotoFloat is smart about file and directory modification time, so you are free to run the scanner script as many times as you want, and it will be very fast if there are few or zero changes since the last time you ran it. Also a part of the Python script is a small flask webapp which allows you to have authentication for certain albums/images and can start the scanner.

It is, essentially, a very slick and fast, fairly minimal but still well-featured photo gallery app.

Tweak the index.html page to have a custom title or copyright notice

Please keep in mind this will not provide any kind of access-restrictions.

Now after deploying /var/www/htdocs/photos.jasondonenfeld.com should contain:

You can easily manage that by creating a folder structure and copying relevant files over:

For easy updates albums and cache can be set to also live in <deployment-folder>, this is especially recommended if you are using the optional flask app mentioned in the following section.

Do not keep any of your config or python-files where the webserver can read or write to, the deployment-config.mk is most sensitive. If you only want the static html/json & javascript application you are done now!

subPhotoFloat ships with an optional server side component called FloatApp to facilitate this, which lives in scanner/floatapp. It is a simple Flask-based Python web application.

We need to install flask and other dependencies, ideally in a virtualenv, as this will keep your system-wide python installation clean and you can easily install more packages or different versions.

Give this file a correct username and password for an admin, as well as a secret token. The admin user is allowed to call /scan, which automatically runs the scanner script mentioned in the previous section.

In app.cfg you may also add elements to the PERMISSION_MAP as follows. The dictionary takes any path (to either an album or an image) and restricts any album or image matching that path to the listed tokens.

Tokens can contain anything you wish and you can add as many paths and tokes as you require. One match in the PERMISSION_MAP will allow access even if another rule would forbid it. The admin is allowed to see any album or image.

FloatApp makes use of X-Accel-Buffering and X-Accel-Redirect to force the server-side component to have minimal overhead when serving images via flask. Here is an example nginx configuration that can be tweaked:

Note that the internal-* paths must match that of app.cfg, since the flask app will redirect the "external" /albums and /cache paths to internal ones set in that config.

Configure uwsgi (or use an alternate wsgi-provider)

Change the paths for chdir, socket, logto and virtualenv to your preference. Naturally, you can use any of the options available to deploy the flask app.

Be aware: you will very likely have to adapt the deploy-instructions to what you have deployed on your server.
If you are using the flask-app you will most likely not need the Makefiles.

If you have any suggestions, feel free to contact the subPhotoFloat community via our mailing list. We're open to adding all sorts of features and working on integration points with other pieces of software.

Note: As the project is 8+ years old, the mailing list has slowed down a bit, if you do not get an answer immediately, please be patient and give other users some time to respond.

This app is also fairly small, so this might be the perfect project to try and add some small features yourself. For reference you may want to look at the flask & nginx documentation.